Unique mission design aids in success of the science team

Westminster, CO (August 23, 2021) Advanced Space is pleased to be a part of the team led by the University of California, Berkeley, on the NASA Escape and Plasma Acceleration and Dynamics Explorers (ESCAPADE) mission. Advanced Space has supported ESCAPADE’s mission design through many design cycles, seeking ways to make this new approach to planetary exploration successful. The Advanced Space team not only ensured ESCAPADE is set up for success but also performed under a tightly constrained schedule. ESCAPADE has now been confirmed by NASA in the Key Decision Point C review. This critical review assessed launch readiness based on the preliminary mission design; the confirmation means ESCAPADE will progress to launch.

Advanced Space applauds the efforts of UC Berkeley’s Space Sciences Laboratory (SSL) and ESCAPADE team, as this milestone is a culmination of the team’s effort and recognition of the importance of the science plan that has been in development over the last two years. ESCAPADE will send two spacecraft into the first-ever formation about Mars with a focus on understanding the processes controlling the structure of Mars’ hybrid magnetosphere and its interaction with solar wind. The mission will also study the escape of the atmosphere from Mars. The launch is set to take place in 2024 and NASA is actively evaluating launch options.

“Congratulations to Berkeley, PI Rob Lillis, and the entire ESCAPADE team on this significant milestone. This mission has overcome numerous challenges to get to this point and we are grateful to be a part of this world class team,” said CEO of Advanced Space, Bradley Cheetham. “We take pride in this valuable partnership and our ability to rapidly deliver high quality solutions that included an entire redesign of core parts of this mission in just a few short months.”

ESCAPADE is part of the NASA Small Innovative Missions for Planetary Exploration (SIMPLEx) program and is funded through the Heliophysics Division at NASA HQ. The participation of Advanced Space with the ESCAPADE mission showcases the second recent successful partnership with NASA for a rapid, low-cost mission following CAPSTONE, the lunar pathfinder mission for Artemis, scheduled to launch later this year.

ESCAPADE pushes planetary exploration forward with a very enticing budget: the mission will establish a formation of two orbiters about Mars, each with a suite of instruments, for under $80 million. The mission takes advantage of the Deep Space Network’s “Multiple Spacecraft per Aperture” (MSPA) strategy to reduce operational costs of flying multiple spacecraft at Mars. The two spacecraft can fly on any number of rideshare options before departing Earth. For 11 months, the spacecraft will be in interplanetary space before entering a high elliptical orbit around Mars. The orbit will be lowered to the nominal science orbit over the following six months. Advanced Space has developed the strategy to safely establish the formation while satisfying NASA policies including planetary protection.

Advanced Space is known for delivering top quality technology development, optimizing flight dynamics, and accelerating missions in a rapid turnkey manner – making Advanced Space an excellent partner on the ESCAPADE team. “The University of California, Berkeley brought together a talented team that has worked hard on the elements of this unique mission and we are elated to have NASA recognize our efforts,” said Jeff Parker, CTO of Advanced Space. “Our support of ESCAPADE includes multiple facets of the mission’s design, from developing the launch strategy, to flying twin interplanetary cruises, twin orbit insertions at Mars, a coordinated orbit reduction at Mars that yields an optimized formation about Mars, and the concept of operations that positions ESCAPADE for success.”

ESCAPADE is led by the University of California, Berkeley. The mission is managed by the Planetary Mission Program Office at NASA’s Marshall Space Flight Center. ESCAPADE is part of the NASA Small Innovative Missions for Planetary Exploration (SIMPLEx) program and is funded through the Heliophysics Division at NASA HQ. Advanced Space contributed to the mission design and launch strategy of ESCAPADE. The Photon spacecraft is created by Rocket Lab. 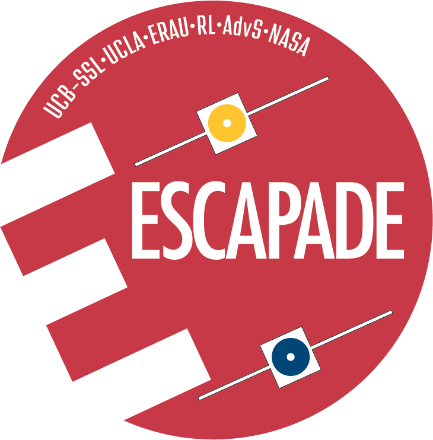