Advanced Space has performed an extensive study of ballistic lunar transfer (BLT) trajectories from Earth launch to insertion into a near rectilinear halo orbit (NRHO). BLTs have favorable properties for uncrewed launches to orbits in the vicinity of the Moon, such as dramatically reduced spacecraft ?V requirements and increased mass delivered to the NRHO. The papers included here describe a detailed set of related mission design studies: BLTs with and without an outbound lunar flyby, insertion and rendezvous of a single spacecraft with a target in an NRHO, and insertion and rendezvous of multiple spacecraft with a target NRHO in quick succession. Monte Carlo analyses are presented of simulated rendezvous operations with realistic errors. These analyses are presented to inform future missions to NRHOs.

An NRHO is a member of either the L​1 or L​2 family of halo orbits and is characterized by having favorable stability properties. Most halo orbits are dynamically unstable, meaning that a perturbation in the position and/or velocity of a spacecraft will grow exponentially over time. The NRHOs are nearly stable, with some that are “marginally stable” in the circular restricted three body problem (CRTBP). When using a high-fidelity model of the Earth-Moon system, NRHOs require some small stationkeeping propellant budget, similar to other halo orbits.

BLTs are a type of low-energy transfer in which a spacecraft launches 1-2 million kilometers away from the Earth (where the Sun’s gravity perturbation becomes dominant), then returns to Earth with a larger radius of perigee than before and a different geocentric orbit plane. When designed with the proper geometry, it is possible to choose the perigee to coincide with the Moon’s orbit, bringing the spacecraft into the vicinity of the Moon. For many three-body target orbits, it is possible to design the transfer such that it arrives at the target orbit with very little insertion ?V required. In the ideal case, the transfer is ballistic (zero deterministic ?V) after launch. This type of transfer is being considered to deliver the Logistics Module, lander elements, and other cargo to the lunar Gateway.

The main advantage of BLTs is that more mass can be delivered to an NRHO or any other cislunar orbit. The figure below illustrates this point. The expected performance of the SLS Block 1 launch vehicle (characterized as maximum launch mass as a function of characteristic energy C3) is used in conjunction with an assumed spacecraft propulsion system Isp of 300 seconds. Proportional benefits exist for other launch vehicles as well. 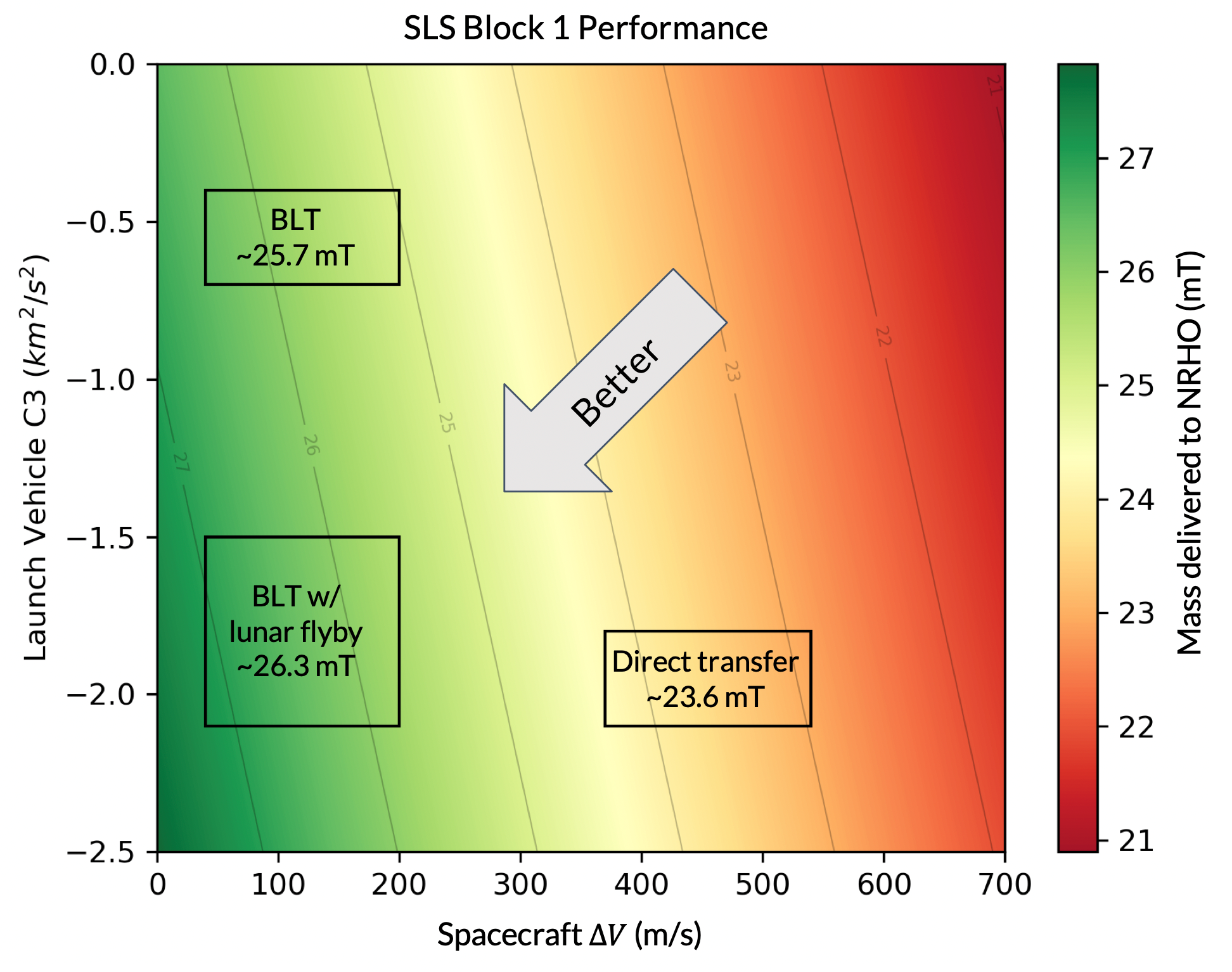 BLTs require less ?V for the spacecraft than direct transfers (50-150 m/s depending on the desired launch period, compared to 350-550 m/s for direct transfers). Other benefits include: reduced operational cadence, more launch opportunities, and the availability to send secondary payloads to anywhere in cislunar space. These benefits require trades including: increased time of flight (12 to 20 weeks, compared to a few days for direct transfers), greater maximum distance from the Earth, increased operations duration, and a higher C3 for some launch options. These benefits and trades are expanded upon in this paper. Further studies will characterize the costs/benefits of navigating BLTs to NRHOs compared to direct transfers.

This paper identifies and studies several favorable families of BLTs, where a family is defined as a set of solutions that are topologically distinct from other sets of solutions. Tens of thousands of possible trajectories have been generated, optimized, and evaluated in order to understand the trade space. Some of these solutions are illustrated below. 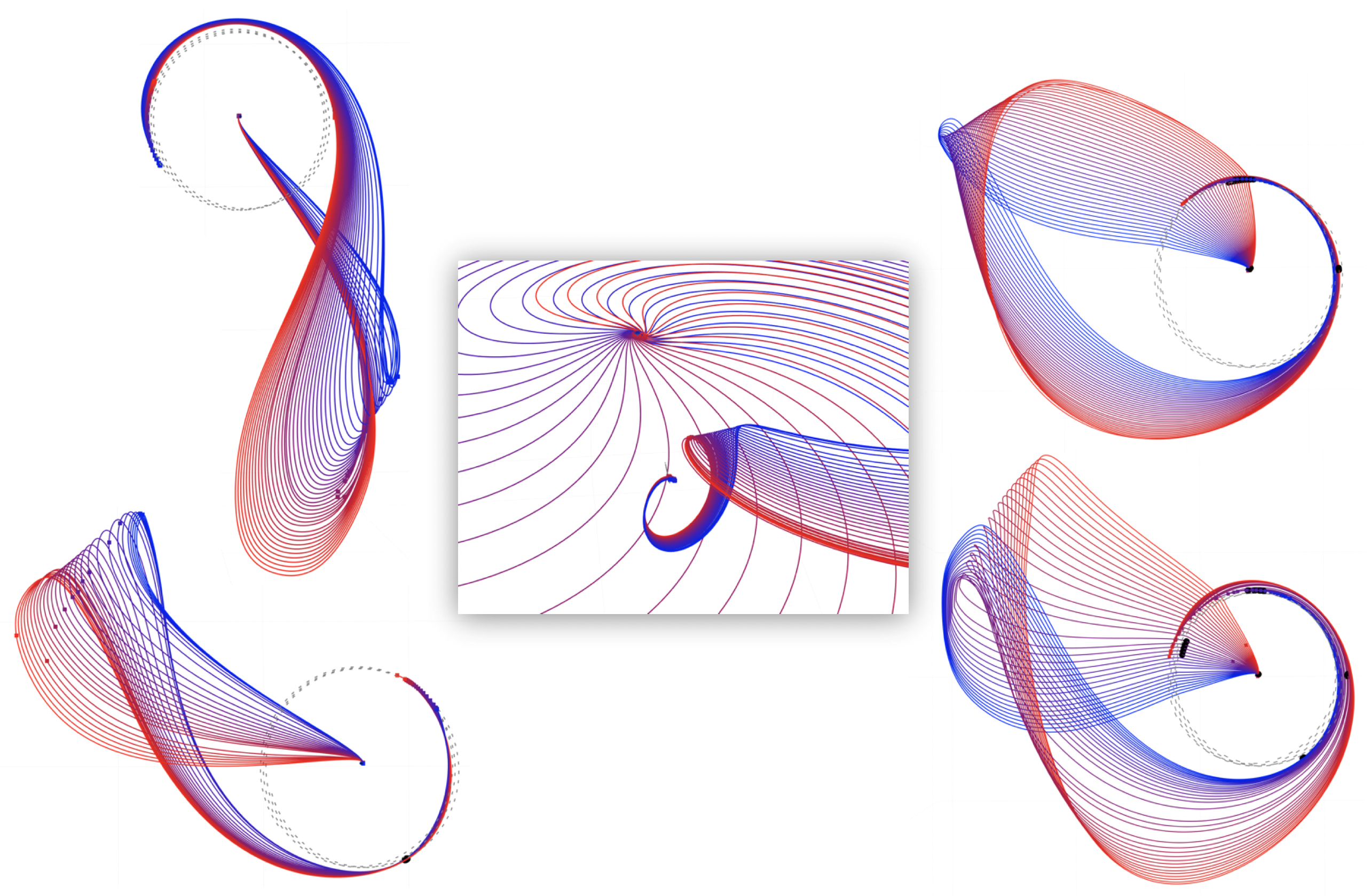 These and other related analyses are presented to enable practical mission planning. Such analysis informs any future missions to NRHOs and to halo orbits in general. The results are particularly relevant to the planned Lunar Orbital Platform-Gateway.

Need a “cheat sheet” on hand for easy reference? Download this guide that includes: summarized high-level mission design considerations for BLTs to the Gateway near-rectilinear halo orbit (NRHO) or other lunar orbits; described requirements for ΔV, along with a discussion of the driving factors; and discussion of included example transfers.

Survey of Ballistic Lunar Transfers to Near Rectilinear Halo Orbit.

This paper presents a survey of ballistic lunar transfer (BLT) trajectories from Earth launch to insertion into a near rectilinear halo orbit (NRHO). Results are described from a detailed set of related mission design studies: the evolution over time of families with and without an outbound lunar flyby; analysis of eclipses; analysis of the ?V requirements of changing arrival time to rendezvous; and description of the trade space for time of flight vs deterministic ?V. An ephemeris model is used throughout. These analyses are presented in order to inform future missions to NRHOs.

This paper presents a study of ballistic lunar transfer (BLT) trajectories from Earth launch to insertion into a near rectilinear halo orbit (NRHO). BLTs have favorable properties for uncrewed launches to orbits in the vicinity of the Moon, such as dramatically reduced spacecraft ΔV requirements. Results are described from a detailed set of related mission design and navigation studies: maneuver placement, tracking cadence, and statistical ΔV requirements for various navigation state errors. Monte Carlo analyses are presented which simulate BLT navigation with various DSN tracking schedules. These analyses are presented to inform future missions to NRHOs.

This paper presents the results of both a high-fidelity simulation of spacecraft orbit determination in a near rectilinear halo orbit (NRHO), as well as investigations of various aspects of NRHO operations, including NRHO insertion and long-horizon orbit maintenance. Others in the literature have examined the NRHO navigation problem with linear covariance analysis, but the highly-nonlinear dynamics of this orbit challenge the assumptions underlying such analyses. The present work builds on similar analysis performed by other authors to contribute a fuller understanding of the operational requirements for NRHO navigation. The present work serves as a check to the assumptions of previous studies and an independent verification of those results. Various trades are performed, including: NRHO insertion cleanup, short-horizon and long-horizon orbit maintenance, tracking cadence, tracking pass placement, filter type, measurement noise, and measurement type. Spacecraft state uncertainty estimates are evaluated as a function of time. Simulated range and range-rate measurements with the Deep Space Network (DSN) ground stations are used to model orbit determination accuracy. Orbit maintenance maneuvers are performed using both shorthorizon and long-horizon stationkeeping targeting. Monte Carlo analysis of orbit determination and stationkeeping is performed.

Advanced Space is continuously looking to add to our team. We're always taking resumés for full-time and internship positions.